Gooey. Fudgy. Squidgy. Chocolatey. Hedonistic. Lush. Try as you might, there’s no one-word that truly encapsulates what a chocolate brownie is. It’s a humble thing made with humble ingredients, but it deserves adjectives. If you don’t offer them up initially, it will illicit them from you after the first bite.

I made these to take to a friend’s house, so I wanted to turn the decadence up to eleven. Enter, blackberry compote and a cheesecake topping. I kept the cheesecake layer fairly thin, just so they travelled better and didn’t detract from the brownies. Each mouthful was cut with the creamy sweet cheese, which I thought was spot on. However, there’s no reason not to increase the cheesecake mix so that you get a thicker more defined layer.

I can’t stress enough, how important it is to use decent chocolate. With this recipe, you’ll get out of it what you put in. And don’t skimp on the chocolate either. And for the love of God, don’t even consider swapping out some of the chocolate for cocoa powder. If you want those first-bite adjectives, you’ll have to treat this recipe with the respect it deserves. 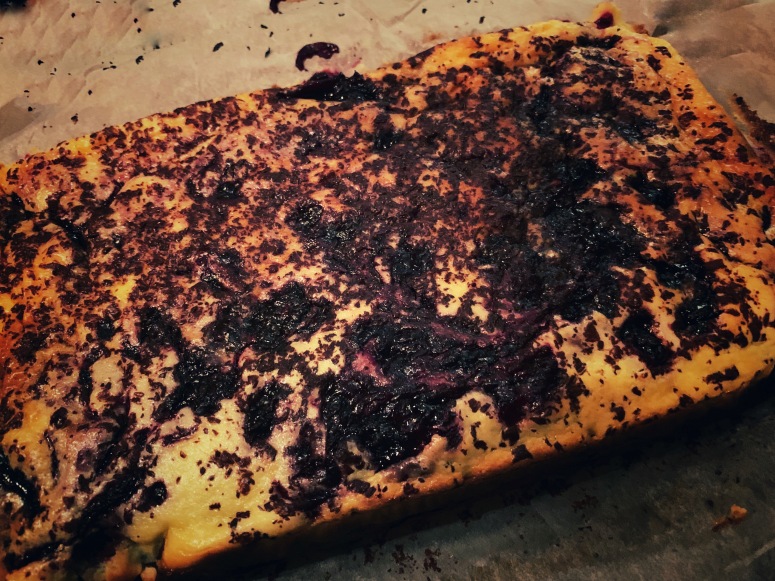 FLAVOUR PROFILE: Squidgy, fudgy and chocolatey, with pops of tart blackberry and a thin layer of creamy cheesecake.

GOES GREAT WITH: These brownies are very rich, so they don’t really need anything else… Okay, if you’re feeling particularly naughty or you want to turn your cheat day up to eleven – maybe a scoop of ice-cream would be nice… and a drizzle of chocolate sauce… and a glass of Brandy…

NOTES: If you want a fudgier consistency, bake for 35 minutes. If you prefer your brownies a bit firmer with more of a cakey texture, bake for 40 minutes. I baked mine for 40 minutes, as I was cutting them up and taking them along as a gift.

For the Brownie mix:

For the Cheesecake Topping: